Our festivals are very scientific:

Badadashain is a festival of power worship. It is a festival of Nature worship. Its importance is special in our agricultural country with diverse language and culture. Geographically, no deposit is made in the mountainous region. Even if they do not observe tithing, they believe in the power and worship it. Durga is worshiped in the mountains, just as Buddhists in the Himalayas worship Palden Lhamo or Chamunda. They also do lama calling, drinking alcohol, playing jhyali etc. Religiously, Christians and Muslims do not celebrate. Otherwise, Dashain is celebrated with pomp and circumstance in the entire hills and Madhesh. 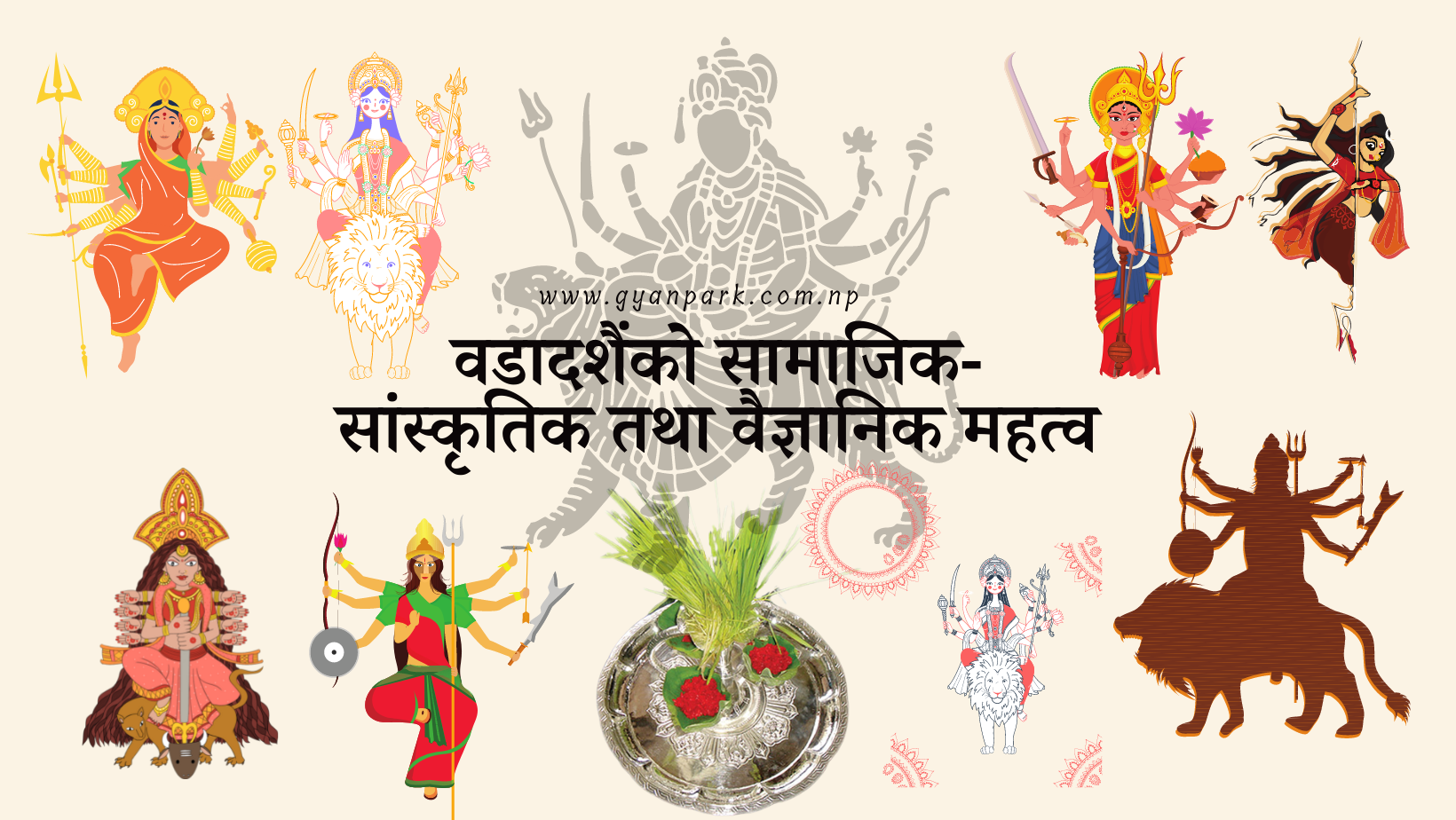 In ancient times, it was customary for all castes to celebrate Dashain by worshiping Shakti according to their own traditions. In recent times, Hindu law has prevailed. As a result of the ruling power, the Hindu method has also affected the tribal community. This method was especially popular as the Thakuri kings expanded their kingdom. The king lived in a coat. Mir Umra lived in the coats where the king did not sit. There were forts. There were doormen, chiefs and talukdars in the village. There were four or five tolls in one village. There were chiefs and talukdars in each group. In some villages, there were up to two or three talukdars. Such a unit of talukdars was called Jhutta, it was the then administrative unit. At this time, Gaddisin called the king the state official and the king's great teacher the Dharmadhikari. On the day of flowering, it was customary for the king of Bada Guruju to hold water in the palace and the chief priest to worship Dashain as a resolution. It was customary for the Mir-Umra of Kot to be the representative of the state in Kot without a king, Gadhi Gowda, for the village headman-talukdar to fetch water, and for the Brahmin priest to be the representative of Dharmadhikari. By the fort, the village chiefs, the talukdars were not only Brahmins and Kshatriyas. Gurung, Magar, Rai and Limbu were also there.

A festival from time immemorial

From time immemorial, the tribal community has been celebrating the tenth. But, the method was different. For example, in the present Gorkha, there were three states called Tallokot, Majhkot and Upallokot. Ghale was the king in the lower coat and the upper coat. Khadka was the king of Majhkot. They are Magar, not Khadka Chhetri. At that time, the members of the League-League used to have a feast on the river Chepe on the day of vaccination in Baradsai and run away after postponing vaccination. It was customary to be the king who reached the coat first.

This became the tradition of the Ghales celebrating the tenth. Gurung still worships the father on the day of flowering. There is a tradition that one should run away from one's father before eating meat and rice. They go to the forest outside the village on the morning of flowering and worship Vayu. After paying homage to Vayu, that is, his aggrieved father, saying, 'Come on the tenth, eat and drink,' it is customary for him to eat meat and rice. Similarly, on the day of Kalaratri, the Gurungs worship in their own way by calling Jhankri, Ghabri, Lama. Then, after the tenth tika, Pandi (astrologer) goes to the place and comes and goes. Ana-mana is the act of removing the language of the genealogy by keeping one ana of money, one mana of rice and alcohol. Pandi says genealogy. Genealogy is a story of pride. The day of listening to the genealogy by removing the language of that genealogy is the day of the tenth commentary.

Distinguish between the red tika and white tika

Some Gurungs, Magars, Rai-Limbus wear white tika nowadays. Some are heard protesting the red vaccine. But, when the sacrifice is worshiped, then no matter what the animal sacrifices, the blood is first spilled in the temple, then on the akshata on the plate. It is customary for Gurung Magar and Rai Limbu to administer the vaccine. Now there is a difference between white tika and red tika. The Gurung-Magars began to say that this comment was not ours, but that of the Brahmins. However, the Brahmins are not a slaughtering caste. Gurung, Magar and Rai Limbu are the castes who sacrifice and kill. Therefore, it cannot be said that the red vaccine is not ours because of the caste that is vaccinated in the blood. Even now in Dullu Dailekh, Khas Brahmins do not apply red vaccine, they apply the yellow tika by mixing curd rice and turmeric. Most of the Khas Brahmins are in Dailekh. For example, there is a place called Rijupokhara in Dullu. Riju became Rijal, Pokhara became Pokhrel. This is an example. The fact that the yellow vaccine is still used in the ancient sacks of the Khas Brahmins proves that it was not customary to wear the red vaccine before the sacrificial worship.

A fusion of diverse cultures

The Aryan race has the distinctive ability to embrace the culture and traditions, to embrace the language and to Sanskritize it after moving to a certain place. For example, we call the river Gandaki a Sanskrit word. But, it is not a Sanskrit language. In the Magar language, it was called 'Gandi', meaning 'green water'. Gandaki has become degenerate. The Koshi River is also said to have been named after the sage Kaushiki or Kushik. Not so. In the ancient Kirat language, water was called the Khu river. For example, there is a place called Samakhusi in Kathmandu. He became Sanskritized out of happiness. Thus the Aryans Sanskritized the language and culture. The tradition was also Sanskritized or Aryanized. At present, Pashupati has a signboard for Hindus only. But who discovered Pashupati? This is what Mex Kirats discovered. Here, too, there was a gradual Aryanization.

The same thing happened in the tenth. Various cultures were adopted by the Aryans. Now some people think that this is a festival and ritual of the Brahmins. But, this is everyone's festival. Indigenous Bhumiputras have a close relationship with nature. That is why the practice of worshiping stones, worshiping water sources, worshiping at the base of trees, etc. has been going on since time immemorial. For example, Gurung has had a tradition of depositing money since time immemorial. The ancient Khol and the present-day Pas village are examples of this. A Gurung from Manang has been hunting in Khol village at the foot of Lamjung Himal. Oh, he thought it was such a good place, so he wanted to test the soil to see if it was suitable for settlement. For that, they scattered some of the Uva seeds they had. By the next year, Uva would have become an earring of one hand. It was said that there would be farming and people would settle here. Depositing is a test of the soil. In Lamjung's Pas village, rice seeds are not kept directly in the beds. According to the site given by Pandi, the Gurungs of the village take it to the Duna-Tapari storehouse, sprinkle it with gold water and worship it, grind the soil and put seeds in it. The same seed is then mixed with other seeds and placed in a bed. Such a tradition is still alive. However, some Gurungs say that Jamara is not our tradition, such a problem is seen due to lack of understanding.

The rites and customs of celebrating Dashain are also different. In the Himalayan district of Manang, there is no vaccination and no vaccination. But the Gurungs there gather the gentlemen and slaughter the sheep on the day of the tenth vaccination and drink the wine. However, this trend started much later. They have done this to make him king. Because the king had given special autonomy and freedom to the Manangs. After the abolition of taluki practice in 2022 BS, the law of the Government of Nepal has been implemented there. Otherwise, before that, after paying the annual fee, they would not have to obey the laws of Nepal. At that time, ordinary Nepalis did not get passports to go abroad for business. Most of the Nepalis did not go abroad except to be recruited in the Gurkha platoon. However, Manang's were still allowed to do business in Singapore and Malaya, they could get a passport. Having so many privileges, they gather to be king on the day of the tenth Tika. Have fun.

The Dashain is based on science

Today's young generation seeks science in everything. Old age makes it difficult for them to explain science, so they call it bigotry and superstition. But our festivals are very scientific. Let me give you an example: The effect of the hailstorm is that the farmer who is stuck in the mud, covered in the rain, and sleeping in the mud, does not get good food. At this time, farmers are like fish caught. To survive the winter, they eat meat and rice for decades. In particular, the broth is considered meat. Linge plays ping pong to digest it. Eating too much meat at one time causes indigestion, diarrhea or other diseases. That's why they play ping pong with fun. The muscles that are dry during the rainy season are activated. The addictions that linger are stretched. This is very scientific.

There are four Navratras in a year. The Dashain also happens in Paush, also in Chait, also in Asar. But, autumn Durga Puja is Badadashain. It is believed that the goddess is especially happy to worship at this time. To understand the worship of Navratra from Pratipada to Navami, we need to understand its importance. The night is dark. Darkness is infatuation, lust, lust or attachment. We worship Navratri to remove the attachment of the nine pores of our body. Removing the attachment within us means strengthening the holes. For example, the eye may have thought of sin, the mind may have grown evil thoughts, injustice-oppression may come. After overcoming such attachments and attachments by worshiping continuously for nine days, the holes become stronger and cleaner. This is the worship of Nava Durga, even though various legends and stories have been created over time. In the end, may the great tithe of 2078 BS bring wisdom to all Nepalis, end the global corona epidemic, maintain political stability in the country, and be happy.

(Based on the conversation with Prof.Dr. Jagman Gurung)