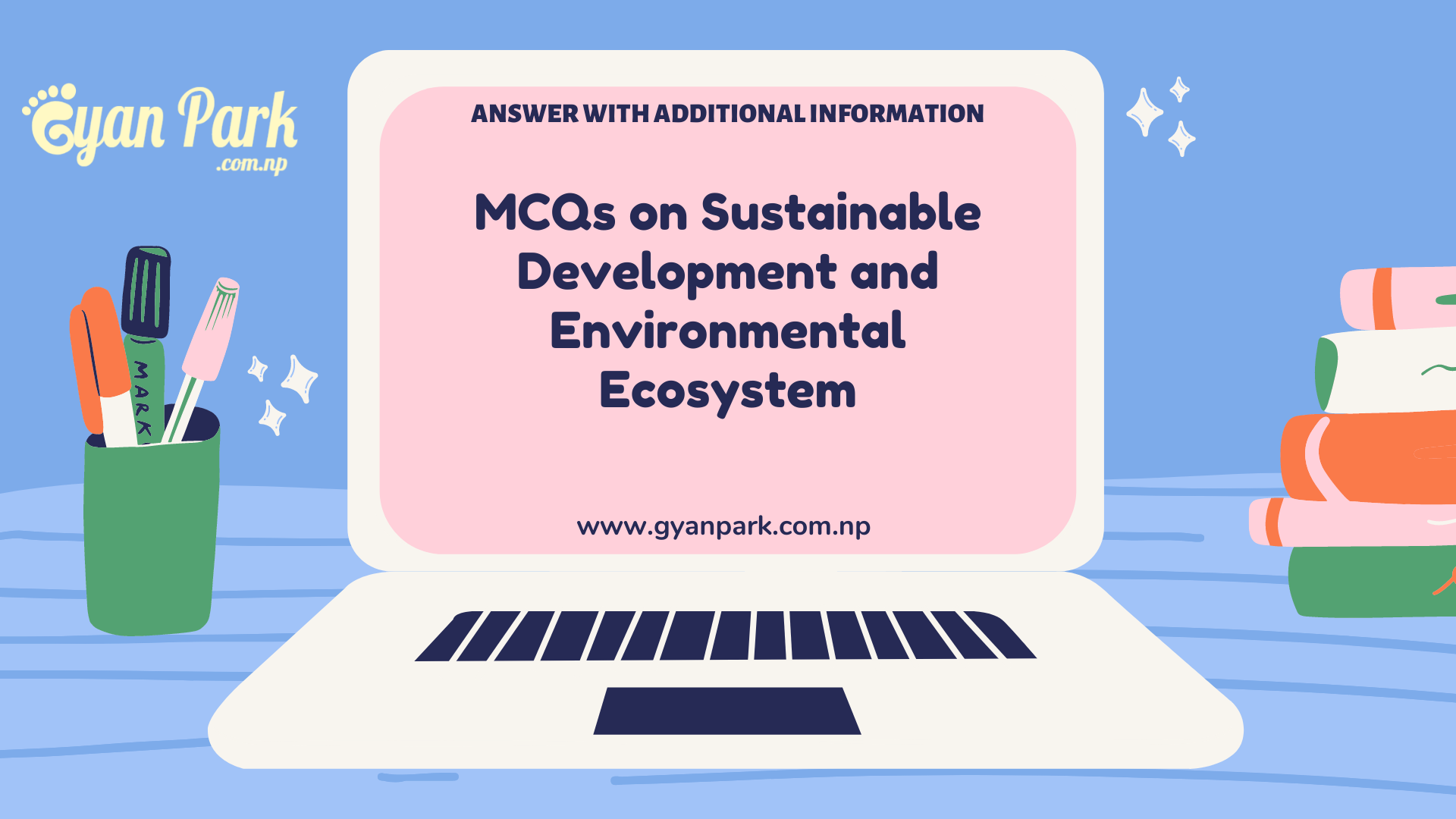 1. Who coined the term "Sustainable Development"?


2. Where is the Secretariat of the Ramsar Convention located?


3. Which of the following is not a Green House Gas?


4. When is the Biodiversity Day celebrated?


6. Which periodic plan of Nepal has included "Ecotourism" for the first time?


7. Which is the first National Park of Nepal to be listed in World Heritage Sites?


9. Which of the following has an inverted ecological pyramid?


10. Which Environment Prize is commonly known as "Green Nobel"?


Thank you for the successful test. Try next tests.

1. The correct answer is Barbara Ward. British Economist and Writer Barbara Mary Ward used the term "Sustainable Development" the first time in the 1980s. Kenyan Environment Political Activist Wangari Maathai is well known for Green Belt Movement. Indian Environmentalist Sunderlal Bahuguna is a Chipko Movement (the 1970s) leader. Gro Harlem Brundtland, Norwegian Prime minister was known for having chaired the Brundtland Commission (1983) which presented the Brundtland Report on sustainable development (1987).
2. The correct answer is Gland, Switzerland. Ramsar Convention (1971 Feb 2) was held in Ramsar, Iran but its secretariat is based at the headquarters of the International Union for the Conservation of Nature (IUCN) in Gland, Switzerland. Similarly, HQ of WWF: Gland, Switzerland, UNEP: Nairobi, Kenya, CITES: Geneva, Switzerland.
3. The correct answer is Carbon Monoxide. Carbon dioxide, Methane, Nitrogen Oxide, Hydrofluoro Carbon, Perfluoro Carbon, Sulfur Hexachloride and Water Vapour are Green House Gases.
4. The correct answer is May 22. Biodiversity Day (May 22) is celebrating since 2012. Similarly, February 22: World Scout Day, March 22: World Water Day, April 22: Earth Day.
5. The correct answer is Hector Ceballos Lascurain. The term "Ecotourism" was coined by Hector Ceballos Lascurain in 1983. Similarly, Jonathan Shanklin is a meteorologist who has worked at the British Antarctic Survey since 1977. Together with Joe Farman and Brian G. Gardiner he discovered the "Ozone Hole" in the 1980s. Robert Angus Smith was a Scottish chemist, who investigated numerous environmental issues. He is known for his research on air pollution in 1852, in the course of which he discovered acid rain, and is sometimes referred to as the 'Father of Acid Rain'. Thomas Midgley Jr. was an American chemical engineer known for inventing first chlorofluorocarbons (CFCs), Freon.
6. The correct answer is "6th Plan". 6th Plan: Environment and Land Use Policy along with Ecotourism, 7th Plan: Environment Impact Assessment (EIA), 8th Plan: Concept of Sustainable Development, National Conservation Strategy 1988 for sustainable development, 13th Plan: Separate Chapter for Climate Change and Environment Conservation, Climate Finance System, Climate Change Budget Code, 14th Plan: Sustainable Development Goals (SDGs).
7. The correct answer is Sagarmatha National Park. Two National Parks Sagarmatha (1979) and Chitwan (1984) are listed in WHS. Chitwan is the first National Park of Nepal by the establishment date (2030 BS). Shey Phoksundo National Park (Dolpa-Mugu) is the Largest (3555 Sq. Km) and Rara National Park (Mugu-Jumla) is the smallest (106 Sq. Km) by area.
8. The correct answer is Forest for Prosperity. "Forest for Prosperity" is the slogan for Forest Decade 2071-80 Nepal.
9. The correct answer is the Pyramid of Biomass of Aquatic Ecosystem. Sum total of the biomass of benthic animals exceeds the producers in the aquatic ecosystem.
10. The correct answer is the Goldman Environment Prize. Goldman Environmental Prize is established in 1989 and started to distribute from 1990. The Founder of this award is Richard N. Goldman and Rhoda H. Goldman (179,000$). Blue Planet Award is the Largest Environmental Award by Amount of Prize (50 Million Japanese Yen).