Aato is a kind of Nepali food. It is made by grinding maize, wheat, etc. to flour in a mill or in a mortar (Jaato) and boiling it in water. This dish tastes like rice.

Kinema is a dish made from soybeans. This dish particularly belongs to the Limbu caste of Eastern Nepal. This dish is also popular in Yakkha, Rai and Sunuwar sects. In the beginning, soybeans are roasted without being crushed. Then it is boiled in water. After boiling, it is spread on mandro or banana leaves. After some cooling, a little bit of fine ash is mixed in it and a banana leaf or a plastic bed is placed on the side of the fire (Ageno) in a dalo or thunche. The act of keeping it that way is called keeping suma. It should be well covered. If the wind blows, Kinema won't be good.
Kinema is ready after two days of keeping Suma. When you open the suma, white fibers are seen in it. If it is sticky when touched, it is considered Kinema to be grown. The kinema prepared in this way is kept well dried in the sun and can be picked up and cooked when needed and sent somewhere as gift (koseli).
Kinema is advisable to eat in winter season. It is also used to treat colds. It can be eaten only by making soup, but when mixed with other vegetables and lentils, it gives a different taste.

Eating Kwaati has been practiced on Janapurnima since time immemorial. The word "Kwaati" is derived from the Nepal language, "Kwaa" means hot and "Ti" means liquid or soup, so "Kwaati" means hot soup. During Janai Purnima, it is customary to eat a Kwaati of pulses at home. Pulses such as gram (Chana), masyang, mugi, bodi, maas, soybean, big bean, big peas, small peas are mixed. It is customary to soak a mixture of such pulses in water before sprouting. These dishes are beneficial for health as they are cooked only after soaking for four days and sprouting sprouts. The sprouts of nine different types of pulses are eaten on the full moon day. Kwaati is also characterized by the combination of both energy and taste. According to religious beliefs, it is customary to eat kwaati on each Shravan Shukla Purnima, i.e. Janapurnima night. Kwaati is the specialty of Janai Purnima. Hindus celebrate Janapurni or Rishitaparni festival all over the country.
Its benefits

Khichadi is a kind of Nepali dish. This dish is used as a staple food in some parts of Nepal, India, Bangladesh and Pakistan. On the first day of Magh month (Maghe Sakranti), Khichadi is eaten in Nepal. Khichadi is prepared by mixing rice, maas and salt.

Khole is a kind of old Nepali food or vegetable dish. Khole is a thick paste made by cooking flour of maize, rice, soybean etc.

Gundruk is a food made from greens. Gundruk is a traditional vegetable made from rye greens, mustard greens, radish greens, etc. It is also known by foreigners as a special food of Nepal or Nepali people. It is eaten especially in winter.
Hidden mustard, zucchini, radish leaves are picked and dried in the sun for a few days. A deep pit is dug. The pit is heated by lighting a fire. In order to prevent the soil from getting wet, bamboo poles, straw and millet taps are placed around it and covered with musli (thick round wood) in the middle. Sometimes it can be put in a container or in a clean tin. Usually after 22-25 days it becomes sour and is expelled. It is taken out and kept dry in the sun for many days.
It can be kept for years by keeping it in a bag with a lid so that it does not get windy. Gundruk's liquid is eaten. It is customary to eat Gundruk soup instead of dal.

It can be eaten either hot or cold. It is a simple dish made with little ingredients. It is mainly a pickle of potato and curd. It is especially popular in the western development region of Nepal As in the program, puja is considered as obligatory in brataband marriage etc. At present, this pickle is easily found in Tes and neighboring districts like Rupandehi, Syanja, Nawalparasi, Arghakhachi, etc., in most of the houses and hotels. Even in Kathmandu, it can be seen that it is being dug nowadays. This pickle is considered to be popular because of its different taste and taste.

Dhido is a traditional Nepali food. It is made from corn, wheat, millet or sorghum flour. This is a healthy and accessible Nepali dish. With the increasing pressure of tourists in Nepal, its connoisseurs are found not only in the country but also abroad. It requires some special skills to cook. If left unmanaged, they can be left astray and lose the right path. This food is very good for patients with diseases like diabetes, high blood pressure, and uric acid.
Slowly add the boiling flour to the water and keep stirring. Run well until it melts. When all the lumps / knots have burst, shake them well and remove them after cooking.
Ghundruk, curd, pickles, sisnuko khole, lentils, etc. are delicious to eat with Dhindo.

Phando is a kind of old Nepali food. This dish used to be very much used in Nepali communities like the current dal.
The phando do is cooked thinly or with a fork. It is a kind of mud-like shell. The young corn kernels are made by pressing. It was a Nepali thought and custom that at one time all Nepalis ate, but at other times only poor families ate. But now in Nepal's expensive hotels, the rich class pay a lot of money to eat a variety of dishes.

To make this battuk, first of all you need siltung flour. Siltung flour is rubbed with salt, finely chopped greens, etc. as required. And the dough is made into a small circle by pressing the dough by mixing it with the dough. The mixture of the same circle-shaped flour is cooked in boiling oil or ghee to form battuk.

To make yamari, rice is turned into flour. The rice should be sticky. Touli rice (sticky rice) used to be needed but now it has been replaced by Taichun rice. Very fine flour is given in pure ghee. Cover with boiled water at a temperature of 110 degrees. The smile should be covered, the cover is the same. It should be covered with a clean muslin cloth to prevent direct drying of the wind.
A special dessert made under the Newari tradition "Yamari"
Involved potato flour should be shaped. The shape of the dough becomes like this. The work of making this is skillful work. Without skill, death does not happen. The size of the yamari that you are preparing, you have to get your hands on the flour. The dough should be pierced with the index finger. Fingers should be pierced with pure edible oil. As you move your fingers, the lump of flour becomes thinner. The thin lump turns into a conch. In the middle, it becomes a hollow space like a wine glass. A mixture of sesame flour and Ledo knife is put in the same empty space. This type of yamri is called "bio". The 'bio' shape is figurative. 'Bio' is not only tantric but also physical. By the way, the bio becomes an image of the father's genitals.
The inner part of the Yomari: Another shape of this is triangular. It's called Mayo. The method and technique of making is the same. The triangle also becomes symbolic. Tilchaku mixture is not put inside the mayo. It is filled with a thick lump of ground meat. Mugi is also used instead of mas. Peanuts can be suitable for everyone. Any physical condition remains digestible. Even if we don't eat grains / rice, we cook whole mugi beskan and drink mugisup / juice. Mayo's triangular shape reaches the system and forms a vaginal image.

Sinki is a Nepali vegetable made from radish. The root of radish or radish is crushed and put in gundruk like khadal or golfu, ghanto etc. As it is more sour than gundruk, its pickles and liquid tihun are eaten. Sinki works for digestion and can be kept for many days.

It is made from rice flour. In making this cell bread, rice flour is mixed with milk, ghee, oil, sugar, nauni, semolina, flour and other essential ingredients as required and mixed in the required water. The wet liquid mixture is then dipped in hot oil and ghee.
Sel Roti can be stored at room temperature for up to 20 days. Sel Roti is often used as a special gift to family members away from home or as an offering in worship. 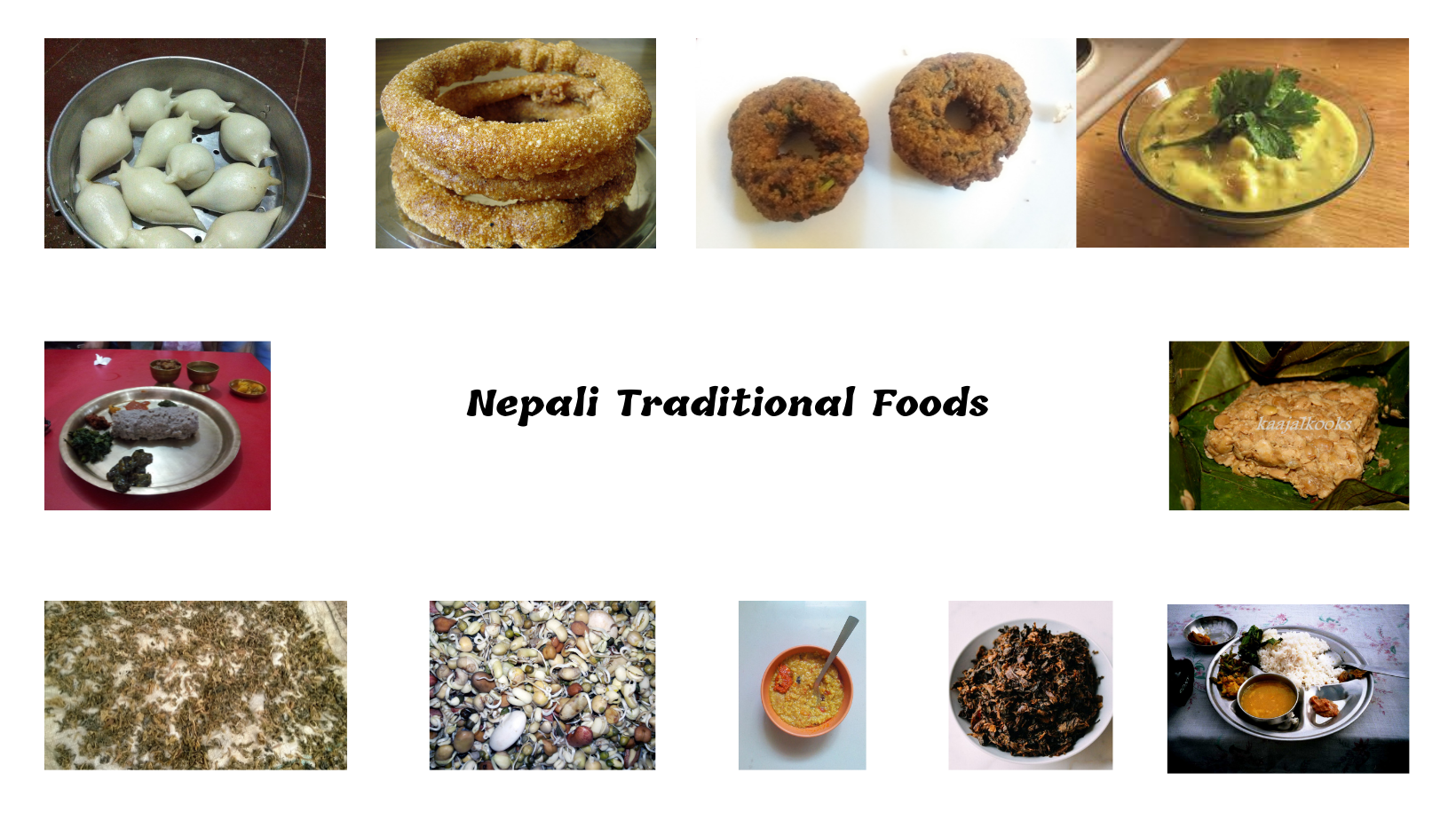