Nepal has been maintaining its unique identity as a sacred land since ancient times. Here the doctrines formulated by various saints, monks and sages through penance, meditation and sadhana have made incomparable contributions in the field of religion and science. Whether it is Lord Gautam or Mahaguru Falgunanda of Kirat Dharma, are the son of this land. Playgrounds of various deities, many sites in Nepal have religious and historical significance. Whether it is yoga, Ayurveda or the emergence of Sanskrit grammar, the connection of Nepali land is directly linked.

Gopalvanshi, Mahishpalvanshi, Kiratvanshi, Mallavanshi or later Shahvanshi rulers who entered Nepal as refugees could not attack the specific culture, traditions and customs of this country but instead embraced and ruled here.

Although Nepal is a medium-sized country in the world in terms of area, Nepal is full of diversity. Geographical, ethnic, linguistic, religious and cultural diversity is evident in Nepal. Nepal is a common flower garden of multi-ethnic, multi-lingual, multi-religious and multi-cultural people.

Signs of Nepal's monasteries and religious sites are associated with Dev's era, but many are unaware of these issues. Nepal is very rich in terms of religion and culture. From various political, religious, economic, cultural activities in the society to science, literature, art, entertainment, etc., all the activities are the elements that identify the nation. If the issues of religious identity and special importance are propagated to the world, it is certain that the nation will earn money and Nepal's head will be raised before the world.

We Nepalis are very weak on the issue of nationality. The Indians have promoted religious and cultural tourism by promoting even places that are not happening. We have not been able to protect and propagate the heritage of Nepalis. The effectiveness of the Government of Nepal, the Department of Archeology, the state government and the local government is not seen in this area. Lately, Nepal has been declared secular against the will of the people. Preservation and promotion of religion and culture associated with sustainable tourism is not a priority of the state. 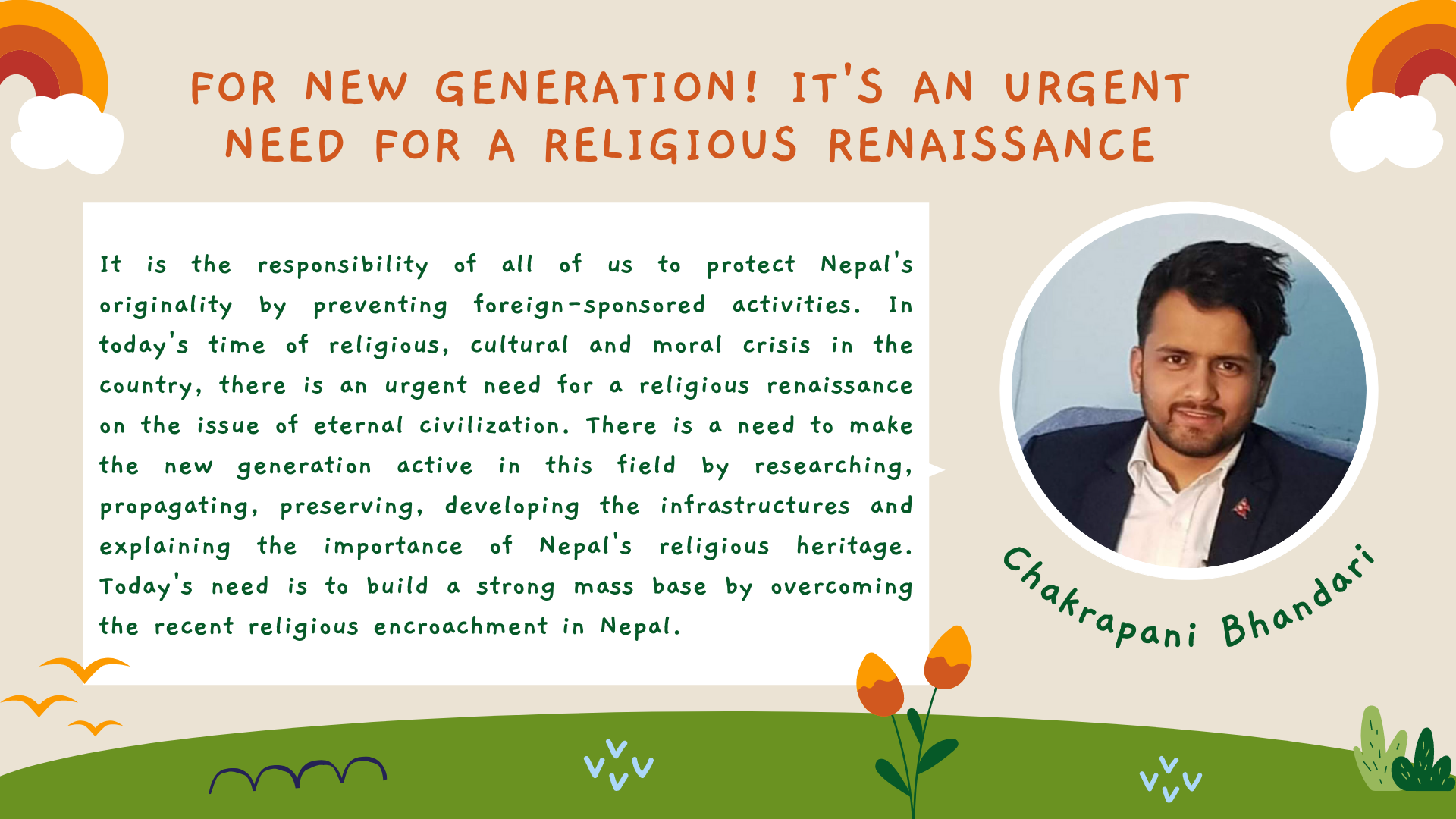 Some elements are being used to disrupt the centuries-old religious and ethnic harmony and tolerance in Nepal. It is the responsibility of all of us to protect Nepal's originality by preventing foreign-sponsored activities. Although the older generation has been involved in research on religious and cultural issues to some extent, it seems to have failed to pass them on to the new generation. In today's time of religious, cultural and moral crisis in the country, there is an urgent need for a religious renaissance on the issue of eternal civilization. There is a need to make the new generation active in this field by researching, propagating, preserving, developing the infrastructures and explaining the importance of Nepal's religious heritage. Today's need is to build a strong mass base by overcoming the recent religious encroachment in Nepal.