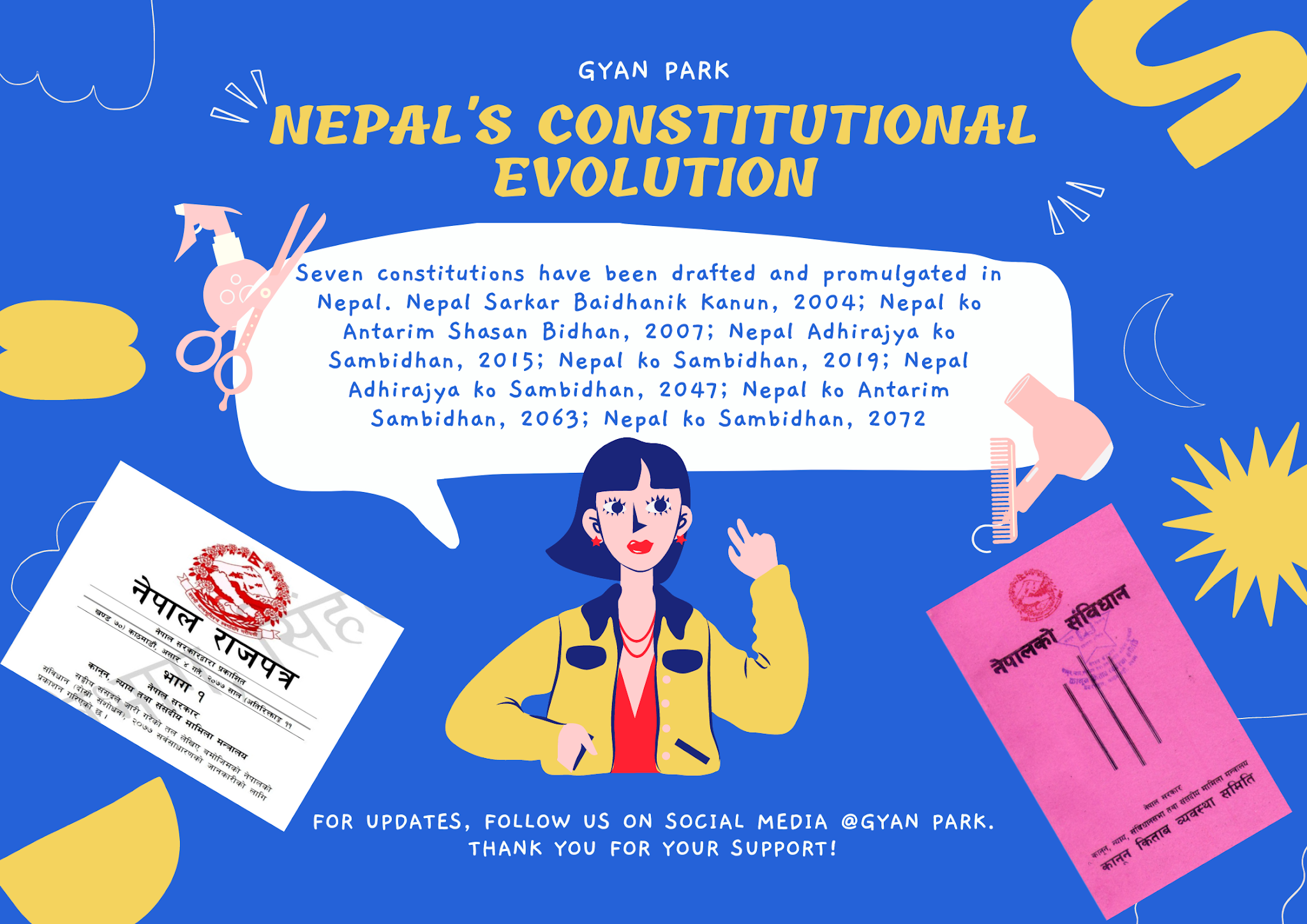 Constitution by Shri 3 and Prime Minister Padma Shamsher. Announced Magh 13, 2004 B.S. Although it was mentioned that it will be implemented from 1st Baishak, 2005, it could not be implemented.
[6 Parts, 68 Articles, and 1 Schedule]
Bicameral: Bhardari Sabha (20 to 30 members nominated by Shri 3) and Rashtrasabha (42 elected and 28 nominated by Shri 3 for 60-70 members)
Supreme Court (having 8 to 12 judges besides the Chief Justice)
Access to justice,
Compulsory and free primary education,
The right to vote,
The right to protection of personal property and other fundamental rights as well as duties were provided, but these rights could be curtailed at any time in the name of morality and public interest.
His Majesty could have amended or postponed for 6 months all the power in himself.

The first constitution to be implemented 2007 B.S. Announced by Shri 5 Tribhuvan on Chaitra 29, 2007,
6-time amendments,
[7 Parts, 74 Articles, 4 Schedules]
The first provision of state policy guiding principles,
Establishment of Legislature and Advisory Council under the leadership of the King,
Establishment of the Supreme Court as the apex body,
Public Service Commission to recommend for the appointment of impartial staff in the civil service. Provision of Auditor General and Election Commission,
Fundamental rights such as freedom of speech and expression, freedom to assemble peacefully without arms, freedom to form associations, freedom to acquire and sell property, freedom to move around the country without hindrance,

Issued by King Mahendra on Falgun 1, 2015 Assisted by British Constitutionalist Sir Iver Jennings.
[10 Parts, 77 Articles, 3 Schedules]
Bicameral: The Legislative Assembly consists of 36 members in the General Assembly (18 nominated by His Majesty the King and the remaining 18 nominated by the House of Representatives) and 109 members in the House of Representatives.
The Shri 5 was in the highest position of the Legislature, Executive, and Judiciary.
The constitutional provision of Public Service Commission and Auditor General.
Using the right given by Article 55, On Paush 1, 2017 B.S., King Mahendra banned the party and overthrew the government.
{Coordinator of the Constitution Drafting Committee / Constitution Suggestion Commission: Bhagwati Prasad Singh (2015), Rishikesh Shah (2019), Bishwanath Upadhyay (2047), Laxman Prasad Aryal (2063)}

Constitution of Nepal, 2019 B.S. issued by King Mahendra on Paush 1, 2019.
First Amendment Provisions of Return to Village National Campaign (Gaun Farka Rashtriya Abhiyan) were added on 14 Magh 2023 B.S.
Second Amendment On 26 December 2032, the provisions of the Commission for the Prevention of Abuse of Authority were added.
Third Amendment The provision of the Election Commission has been added in 2037 B.S.
[20 Parts, 97 Articles, 6 Schedules]
Sovereignty and state power vested in the king.
Two types of citizenship by birth and adoption.
Arrangement of 140 members Unicameral Rashtriya Panchayat.
It consists of 28 members nominated by Shri 5 and 112 elected.
Formation of various bodies of Panchayat at the local level including village assembly, municipal council, village panchayat, Nagar panchayat, District panchayat at the district level, and Zonal assembly at the zonal level.

Constitution of the Kingdom of Nepal, 2047 B.S. 2047 Kartik 23.
[23 Parts, 133 Articles, 3 Schedules]
Sovereignty in the Nepali people for the first time.
Bicameral Legislature: National Assembly (60 members), House of Representatives (205 members). Provision of not to make law in such a way that it is punishable by the death penalty.
Provision of the Constitutional Council to recommend the appointment of the members of the constitutional body.

Interim Constitution of Nepal 2063 B.S., after the success of People's Movement (2nd) of 2062/63,
The reconstituted House of Representatives promulgated this constitution on Magh 1, 2063 B.S., and the Constitution of Nepal on Asoj 3, 2072 B.S. repealed this constitution.
[25 Parts, 167 Articles, 4 Schedules]
The Interim Constitution of Nepal 2063 was amended 12 times.
Sovereignty and state power vested in the Nepali people for the first time.
All mother tongues spoken in Nepal shall be the national language of Nepal.
Arrangement of four types of citizenship including descent birth and honorary citizenship.
Provision of 21 fundamental rights.
Provision of a proportional electoral system for the first time.
Constituent Assembly with 601 members; Of these, 240 are directly elected, 335 are members under the proportional representation system and 26 are nominated by the Council of Ministers.
End of monarchy and arrangement of President as Head of State.
The Supreme Commander of the Nepal Army will be the President.
Flexible arrangement to amend any section.
On 5 Mansir 2063 B.S., a Comprehensive Peace Agreement was signed between the Government of Nepal and the then CPN-Maoist.

Namaste, I'm Susmita Paudel. I love to share what I have learned. I am writing on the Constitution, Management, Economics, Current Affairs niche, and More.