So far, 89 snake species have been recorded in Nepal. Among this great diversity of snakes, we know with certainty of 17 species of snake that are found in Nepal and have the front-fanged type of venom apparatus and thus are considered to be highly venomous and dangerous. These snakes can be subdivided further into two groups: family elapidae and family viperidae and further species. Snakes look similar but their color, scales, eyes and head shape can be useful in distinguishing dangerous species from harmless ones. Some snakes found in Nepal
Green Snakes
Scientific Name: Orthriophis hodgsonii
Structure: They have a few large scales on the top of the head and round pupils.
Harmfulness: These snakes are non-venomous and harmless.
Cat-eyed Green Snakes (Boiga cyanea) have no pit organ between nostril and eye, which distinguishes them from venomous pit vipers.

Green Pit Viper
Scientific Name: Trimeresurus septentrionalis
Structure:  They have a pit organ between the eye and the nostril, which is an infrared detector used to find prey in the dark.
Harmfulness: They are the only venomous species of green snakes in Nepal. Bites are painful but not fatal. 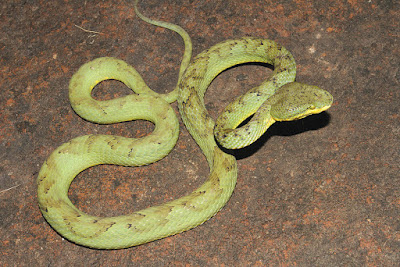 Russel Viper
Scientific Name: Daboia russelii
Nepali Name: Baghe sarpa, Suskar
Structure: Its head is covered by numerous small symmetrical, oval scales, it has a long tail and long venom fangs that fold back into its mouth.
Harmfulness: It is one of the most dangerous snakes in Nepal, found in the Tarai only. 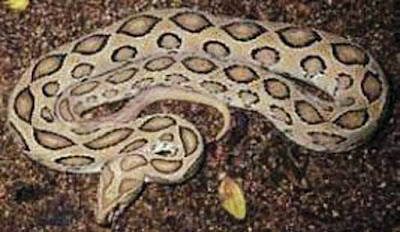 Tibet Pit Viper
Scientific Name: Trimeresurus tibetanus
Nepali Name: Haryou sarpa, Pattar, Karanko haryou sap
Found: Can be found in oak and rhododendron forests on Phulchoki, Helambu and in Tibet, up to 3,200m.
Harmfulness: Bites can be painful, but not dangerous. 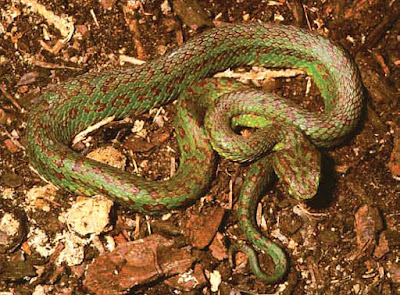 Himalayan Pit Viper
Scientific Name: Gloydius himalayanus
Nepali Name: Bhyagute sarpa
Structure: It has a few large scales on the top of its head, like some non-venomous viper lookalikes. But it has a pit organ and a dark stripe from eye to mouth.
Found: At 1,600-3,000m in the mountains, it is active in the daytime hunting rodents. Has been found in Mustang.
Harmfulness: Bites can be painful but not fatal. 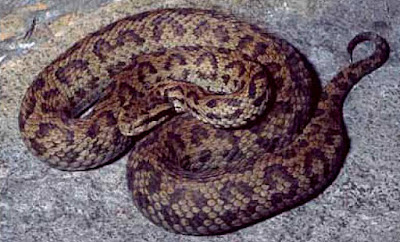 Python
Scientific Name: Python molurus
Character: They can bite if disturbed
Found: Found mainly in the Tarai and low valleys.
Harmfulness: They have no venom but kill prey by constriction. 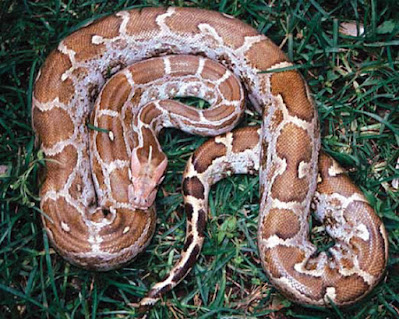 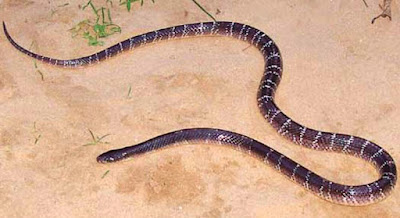 Kukri Snake
Scientific Name: Oligodon arnensis
Structure: differs from Russell Pit Viper in having pupils that are round, large scales on top of the head and no pit organ. Unlike Kraits, it has scales on the back that are all of similar size and shape.

Common Wolf Snake
Scientific Name: Lycodon aulicus
Character: It is a small snake that often enters homes at night to hunt geckos and mice.
Structure: Unlike more dangerous Kraits, it has scales of the same size all over its body.
Harmfulness: They are harmless. 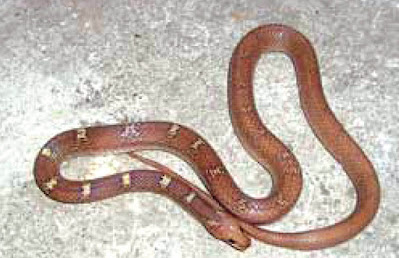 Coral Snake
Scientific Name: Calliophis beddomei
Found: They are rare and found up to 2,200m.
Structure: If cornered, it responds by flattening its body and lifting and curling its tail.
Harmfulness: Bites are rare, sometimes fatal. 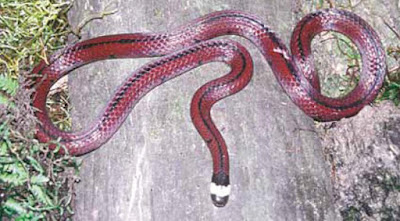 Tawny Cat Snake
Scientific Name: Boiga ochracea
Found: They are widely distributed in the Tarai and mid-hills.
Structure: They are often reddish brown
Character: Active at night,
Harmfulness: Unlike Kraits are not venomous. 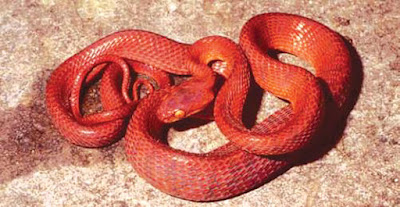 Water Snake
Found: They are common in paddy fields and ponds
Harmfulness: They are not venomous.
The Striped Keelback
Scientific Name: Amphiesma stolatum
Character: It is active by day and rarely bite.
Structure: It has prominent and distinct spots and stripes on the body. 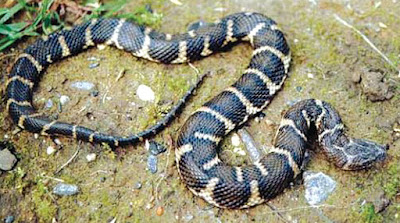 Cobra and King Cobra
Scientific Name: Naja naja, Ophiophagus hannah
Nepali Name: Rajgoman, Kalinag, Kenwata
Harmfulness: They are common and dangerous causes of snakebite envenoming in Nepal. Most bite at dawn, injecting a large quantity of venom that leads to paralysis of the peripheral nervous system, and then death by asphyxia.
Character: Raises forebody, displays extended neck skin hood and hisses when disturbed.
Found:  In the Tarai and up to 3,500m. 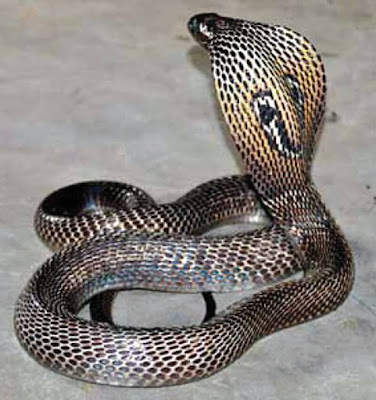 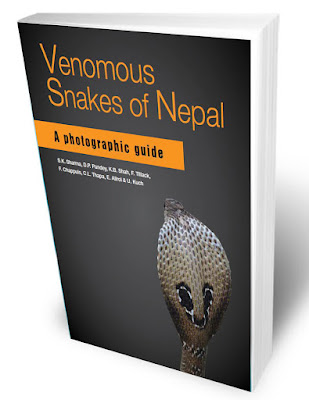